I read Giovanna Fletcher’s fantastic book Always With Love in just two days. If the book charts are anything to go by, you should read it too. Because it’s sweet, fun and flat out adorable.

This is a personal blog, so I’m going to write a personal review. There’s really no denying Giovanna is a brilliant writer, with her books storming the charts always landing at No. 1 and huge queues for book signings that lead straight out the doors. She’s a lovely lady and it shows in her blog posts, Youtube videos and social media. I kind of love her and everything she does.

But, for me, this book was too much. Far too much.

Reading it from my point of view, about a young couple buckling under the weight of a long distance relationship, was hard. Really hard. Because I’ve experienced it and we failed.

As much as I was taken in by the characters and the dreamy chiclit settings, I found myself comparing – and, I admit, painfully recognising – the scenarios that happened to the characters in each chapter and I didn’t see it going well.

From the sweet long distance phone calls between Billy and Sophie right down to the disappointment they felt when they finally saw each other again, only to find it’s not the same as it used to be. Things changed. I recognised it all.

Reading over those same situations, the same scenarios and even the same damn conversations between Sophie and Billy, was heartbreaking. Because they all mimicked my own.

So, okay, my first love wasn’t a huge movie star but he might as well have been. He shone whenever he walked into a room and he never failed to catch people’s attention. Like Sophie, I always felt plain, shy and boring in comparison standing next to him. He shined so bright. I found comfort in my hometown, my family and the places where I grew up, which I never wanted to leave. He had far more ambition and gradually taught me to have some too.

I want to be honest, because I feel like I haven’t been in a really long time and I miss it.

While Giovanna’s book ended as you’d expect in a romance – all happy and giddy with the promise of a future together, and in love – I was left disappointed. Because I recognised all those signs of impending doom throughout the book and neither of the characters acknowledged them.

I felt like, even if they realised deep down that they weren’t meant to be together, they wouldn’t admit it straight away because they were holding onto each other until the next hurdle came along. And it will.

Because they were different people, world’s apart and wanting different things. I guess pretty much everyone can relate to that.

I guess I was expecting them to split up, but this is fiction and, at that, it’s romantic fiction. I imagine Gi would’ve left many fans disappointed if the story ended there, unhappy and broken apart.

Me, on the other hand, I’m still here, trying to recover after a dazzling and heartbreaking read. 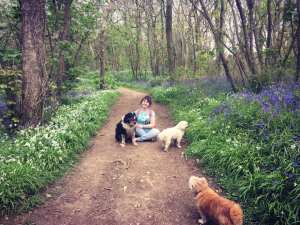